Short history of the city

The earliest known written name of the city was Zabotka or Zabatka,which dates from 1391. It is the origin of the current Hungarian name for the city “Szabadka”.

According to one opinion, the Name “Szabadka” comes from the adjective szabad,[4] which derived from the Slavic word for “free” – svobod. According to this view, Subotica’s earliest designation would mean, therefore, something like a “free place”.

The origin of the earliest form of the name (Zabotka or Zabatka) is obscure. However, according to a local Bunjevci newspaper, Zabatka could have derived from the South Slavic word “zabat” (Gable), which describe parts of Pannonian Slavic houses.

The town was named in the 1740s for Maria Theresa of Austria, Archduchess of Austria. It was officially called Sent-Maria in 1743, but was renamed in 1779 as Maria-Theresiapolis. These two official names were also spelled in several different ways (most commonly the German Maria-Theresiopel or Theresiopel), and were used in different languages.

In the Early Middle Ages various Indo-European and Turkic peoples and states ruled in the area of Subotica. These peoples included Huns, Gepids, Avars, Slavs and Bulgarians. Slavs settled today’s Subotica in the 6th and 7th centuries, before some of them crossed the rivers Sava and Danube and settled in the Balkans.

e Slavic tribe living in the territory of present-day Subotica were the Obotrites, a subgroup of the Serbs. In the 9th century, after the fall of the Avar state, the first forms of Slavic statehood emerged in this area. The first Slavic states that ruled over this region included the Principality of Lower Pannonia, Great Moravia and the Bulgarian Empire.

Subotica probably first became a settlement of note when people poured into it from nearby villages destroyed during the Tatar invasions of 1241–42. However the settlement has surely been older. It has been established that people inhabited these territories even 3000 years ago. When Zabadka/Zabatka was first recorded in 1391, it was a tiny town in the medieval Kingdom of Hungary. Later, the city belonged to the Hunyadis, one of the most influential aristocratic families in the whole of Central Europe.

King Matthias Corvinus of Hungary gave the town to one of his relatives, János Pongrác Dengelegi, who, fearing an invasion by the Ottoman Empire, fortified the castle of Subotica, erecting a fortress in 1470. Some decades later, after the Battle of Mohács in 1526, the Subotica became part of the Ottoman Empire. The majority of the Hungarian population fled northward to Royal Hungary Bálint Török, a local noble who had ruled over Subotica, also escaped from the city. During the military and political havoc following the defeat at Mohács, Subotica came under the control of Serbian mercenaries recruited in Banat. These soldiers were in the service of the Transylvanian general John I Zápolya, a later Hungarian king.

The leader of these mercenaries, Jovan Nenad, established in 1526–27 his rule in Bačka, northern Banat and a small part of Syrmia and created an ephemeral independent state, with Subotica as its capital. At the peak of his power, Jovan Nenad proclaimed himself as Serbian tsar in Subotica. He named Radoslav Čelnik as the general commander of his army, while his treasurer and palatine was Subota Vrlić, a Serbian noble from Jagodina. When Bálint Török returned and captured Subotica from the Serbs, Jovan Nenad moved his capital to Szeged.

Some months later, in the summer of 1527, Jovan Nenad was assassinated and his state collapsed. This was the last independent Serbian state before the final Ottoman conquest of all Serb-populated lands. However, after Jovan Nenad’s death, Radoslav Čelnik led the remains of the army to Ottoman Syrmia, where he briefly ruled as Ottoman vassal.

The Ottoman Empire ruled the city from 1542 to 1686. At the end of this almost 150-year-long period, not much remained of the old town of Zabadka/Zabatka. As much of the population had fled, the Ottomans encouraged the settlement of the area by different colonists from the Balkans. The settlers were mostly Orthodox Serbs. They cultivated the extremely fertile land around Subotica. In 1570, the population of Subotica numbered 49 houses, and in 1590, 63 houses. In 1687, the region was settled by Catholic Dalmatas (called Bunjevci today). It was called Sobotka under Ottoman rule and was a kaza centre in Segedinsanjak at first in Budin Eyaleti until 1596, and after that in Eğri Eyaleti between 1596–1686.

In 1687, about 5,000 Bunjevci, led by Dujo Marković and Đuro Vidaković settled in Bačka (including Subotica). After the decisive battle against the Ottomans at Senta led by Prince Eugene of Savoy on 11 September 1697, Subotica became part of the military border zone Theiss-Mieresch established by the Habsburg Monarchy. In the meantime the uprising of Francis II Rákóczi broke out, which is also known as the Kuruc War.

In the region of Subotica, Rákóczi joined battle against the Rac National Militia. Rác was a designation for the South Slavic people (mostly Serbs and Bunjevci) and they often were referred to as rácok in the Kingdom of Hungary. In a later period rácok came to mean, above all, Serbs of Orthodox religion.

The Serbian military families enjoyed several privileges thanks to their service for the Habsburg Monarchy. Subotica gradually, however, developed from being a mere garrison town to becoming a market town with its own civil charter in 1743. When this happened, many Serbs complained about the loss of their privileges. The majority left the town in protest and some of them founded a new settlement just outside 18th century Subotica in Aleksandrovo, while others emigrated to Russia. In New Serbia, a new Russian province established for them, those Serbs founded a new settlement and also named it Subotica. In 1775, a Jewish community in Subotica was established.

It was perhaps to emphasise the new civic serenity of Subotica that the pious name Saint Mary came to be used for it at this time. Some decades later, in 1779, Empress Maria Theresa of Austria advanced the town’s status further by proclaiming it a Free Royal Town. The enthusiastic inhabitants of the city renamed Subotica once more as Maria-Theresiopolis.

This Free Royal Town status gave a great impetus to the development of the city. During the 19th century its population doubled twice, attracting many people from all over the Habsburg Monarchy. This led eventually to a considerable demographic change. In the first half of the 19th century, the Bunjevci had still been in the majority, but there was an increasing number of Hungarians and Jews settling in Subotica. This process was not stopped even by the outbreak of the Revolutions in the Habsburg Monarchy (1848-49).

During the 1848-49 revolution, the proclaimed borders of autonomous Serbian Vojvodina included Subotica, but Serb troops could not establish control in the region. On 5 March 1849, at the locality named Kaponja (between Tavankut and Bajmok), there was a battle between Serb and Hungarian army, which was won by the Hungarians.

The first newspaper in the town was also published during the 1848/49 revolution—it was called Honunk állapota (“State of Our Homeland”) and was published in Hungarian by Károly Bitterman’s local printing company. Unlike most Serbs and Croats who confronted with Hungarians, part of the local Bunjevci people supported Hungarian revolution.

In 1849, after the Hungarian revolution of 1848 was defeated by the Russian and Habsburg armies, the town was separated from the Kingdom of Hungary together with most of the Bačka region, and became part of a separate Habsburg province, called Voivodeship of Serbia and Banat of Temeschwar. The administrative center of this new province was Timişoara. The province existed until 1860. During the existence of the voivodeship, in 1853, Subotica acquired its impressive theatre.

After the establishment of the Dual-Monarchy in 1867, there followed what is often called the “golden age” of city development of Subotica. Many schools were opened after 1867 and in 1869 the railway connected the city to the world. In 1896 an electrical power plant was built, further enhancing the development of the city and the whole region. Subotica now adorned itself with its remarkable Central European, fin de siècle architecture. In 1902 a Jewish synagogue was built in the Art Nouveau style.

Subotica was part of Austria-Hungary until the aftermath of World War I in 1918, when the city became part of the Kingdom of Serbs, Croats and Slovenes. In changed economical and political circumstances, Subotica was now a border-town in Yugoslavia and did not, for a time, experience again the dynamic prosperity it enjoyed in the years preceding World War I. However, at that time, Subotica was the third largest city in Yugoslavia by population, following Belgrade and Zagreb.

In 1941, Yugoslavia was invaded and partitioned by the Axis Powers, and its northern parts, including Subotica, were annexed by Hungary (This partition of Yugoslavia was not recognized by the international community and city was, from the legal point of view, still part of Yugoslavia, whose only legal representative was Yugoslav government in exile). Hungarian troops entered Subotica on 11 April 1941.

As the majority of people living in the city were ethnic Hungarians and the city had been part of Hungary for over 600 years, Hungary felt it had to protect its people now living outside of its borders. During World War II the city lost approximately 7000 of its citizens, mostly Serbs, Hungarians and Jews. Before the war about 6000 Jews lived in Subotica; many of these were deported from the city during the Holocaust, mostly to Auschwitz.

In April 1944 a ghetto was set up. Also, many communists were put to death during Axis rule. In 1944, the Axis forces left city, and Subotica became part of the new Yugoslavia. During the 1944–45 period about 8,000 citizens (mainly Hungarian) were killed by Partisans re-taking the city as retribution for supporting Axis Hungary.

In the post-war period Subotica has gradually modernised. During the Yugoslav and Kosovo wars of the 1990s, a considerable number of Serb refugees came to the city from Croatia, Bosnia and Herzegovina, and Kosovo, while many ethnic Hungarians and Croats, as well as some local Serbs, left the region due to economical stagnation and fear of racism.

Unique in Serbia, Subotica has the most buildings built in the art nouveau style. The City Hall (built in 1908-1910) and the Synagogue (1902) are of especially outstanding beauty. These were built by the same architects, Marcell Komor and Dezső Jakab, from Budapest, Hungary. Another exceptional example of art nouveau architecture is the actual Artistic Encounter building, which was built in 1904 by Ferenc J. Raichle.

Church buildings include the Cathedral of St. Theresa of Avila dating from 1797, the Franciscan friary dating from 1723, the Orthodox churches also from the 18th century, and the Hungarian Art Nouveau Subotica Synagogue from the early 20th century and is currently in the process of renovation.

The historic National Theatre in Subotica, which was built in 1854 as the first monumental public building in Subotica, was demolished in 2007, although it was declared a historic monument under state protection in 1983, and in 1991 it was added to the National Register as a monument of an extraordinary cultural value. It is currently in the midst of renovation and is scheduled to open in 2017. 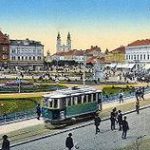 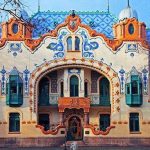 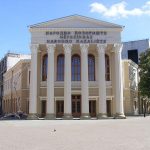